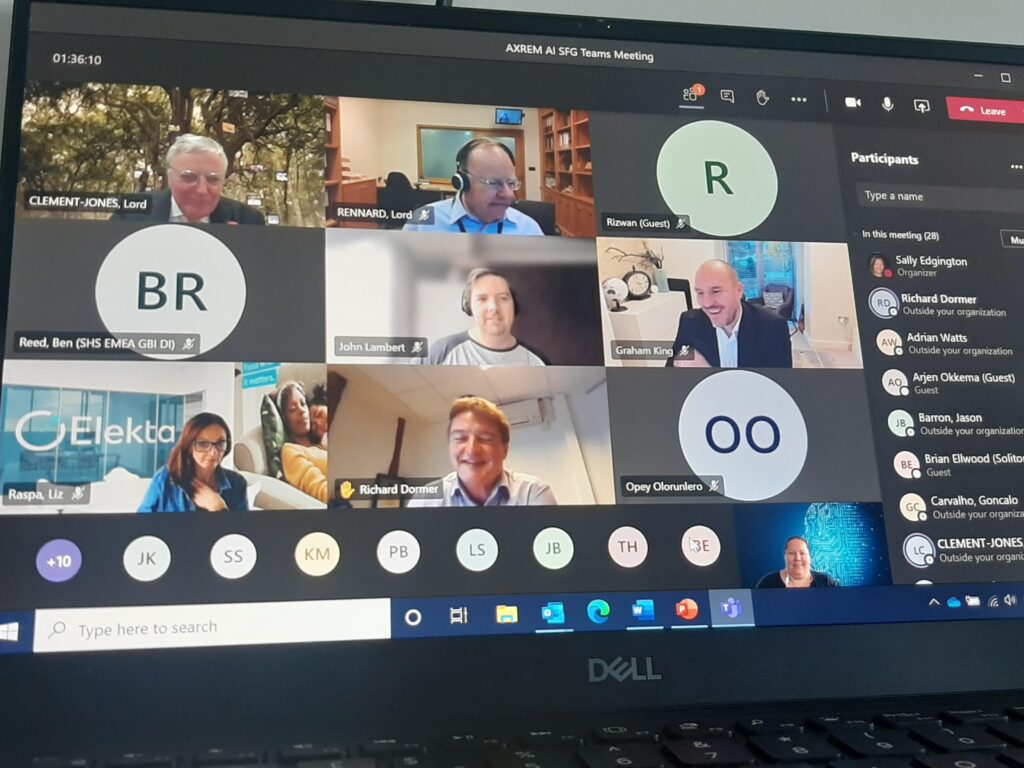 Back in February the AXREM Executive Committee signed off the concept of establishing an AI Special Focus Group for AXREM members. This idea has now been turned into a reality and last week AXREM hosted the first meeting and welcomed over 30 people representing 14 member companies.

The first meeting saw the group welcoming two fantastic guest speakers, the first being Dr Rizwan Malik, Consultant Radiologist at the Royal Bolton Hospital NHS Trust who spoke about the need for companies to consider the value proposition of AI technology. He also advised members of other considerations that should be made and the need to engage with health professionals at the planning stages, to ensure consideration of the clinical environment it will be used in are made.

We then welcomed Lord Clement-Jones who was made CBE for political services in 1988 and a life peer in 1998. He is the current House of Lords Liberal Democrat spokesman for  and the former Chair of the House of Lords Select Committee on Artificial Intelligence (2017-18) and Co-Chair of the All-Party Parliamentary Group on AI.  He is a founder member of the OECD Parliamentary Group on AI and a member of the Council of Europe’s Ad-hoc Committee on AI (CAHAI).

Lord Clement-Jones provided AXREM members with an overview of the work being done by the All-Party Parliamentary Group for AI. Both speakers were able to help the group establish what the focus and priorities of work streams should be and how AXREM can ensure the views of members are represented within the health sector.

Following the meeting Sally Edgington, AXREM Director said “I suggested the idea of an AI group to members and have been overwhelmed with the positive response received before and after the meeting, this adds to the value proposition for AXREM members, but also attracts new members to the association. I am excited to be involved and see what this group will achieve over the coming months and years”.

Since the meeting we are also pleased to announce that a Convenor of the AI SFG has now been appointed and we congratulate Richard Dormer, Managing Director at Insignia Medical Systems who are a long term AXREM member. Richard is a computer science graduate who has worked in medical IT since graduating in 1992. He started Insignia in 2001 following spells with various RIS and PACS companies in the UK and Australia.

Upon his appointment Richard Dormer said, “Artificial Intelligence opens up new possibilities to improve healthcare; as an industry body we are well placed to help the NHS benefit from the many services offered by our members”.

Richard Dormer has already represented AXREM at AI events held by government and will continue to work on behalf of all our members in this exciting field. Richard said “The UK is perhaps uniquely placed to accelerate the benefits of AI, we have the best healthcare service in the world and some of the most innovative organisations within our group – together we can make a real difference in outcomes for patients”.