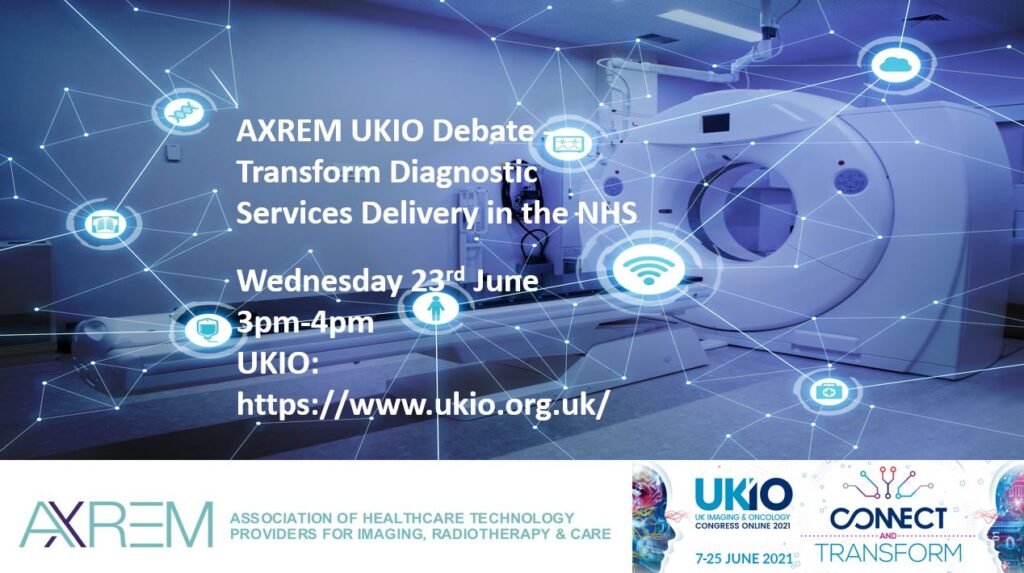 This is a debate where the need to Transform Diagnostic Services Delivery in the NHS would be discussed. In particular the need to provide more Community based Diagnostic facilities, closer to patient’s homes, away from acute hospitals and in line with the NHS Long Term Plan and the recent Report “Recovery and Renewal – Report of the Independent Review of Diagnostic Services for NHS England”.

Lord (Chris) Rennard has been a member of the House of Lords since 1999. He is also a consultant providing management, campaign and communications advice. He was the Director of Communications for the British Healthcare Trades Association (BHTA) from 2011 to 2020. Current clients include AXREM (the trade association representing the suppliers of diagnostic medical imaging, radiotherapy, healthcare IT and care equipment in the UK). He was previously the Director of Campaigns & Elections and then the Chief Executive of the Liberal Democrats (1989 – 2009). His political memoirs “Winning Here” were published in 2018.

Richard Evans started work in the NHS as a hospital porter. He was inspired to train as a diagnostic radiographer whilst working in the x-ray department at University College Hospital and qualified with the DCR at the Middlesex Hospital in 1982. His clinical career in London and Salisbury included speciality interests in neurological imaging and cross-sectional imaging. He went on to become a general manager at Poole Hospital in Dorset.  Richard was an active member of the health-workers union CoHSE and then of the Society of Radiographers. In 2004 he was appointed Chief Executive Officer of the Society of Radiographers and the College of Radiographers, a position he has held ever since.

Dr Jeanette Dickson, President of the Royal College of Radiologists

Jeanette Dickson graduated from Glasgow University. She trained initially in general (internal) medicine in Glasgow and Eastbourne, obtaining the MRCP. After gaining the FRCR, she left the Beatson West of Scotland Cancer Centre to undertake an MD in investigating intrinsic radiosensitivity at the Paterson Institute, Manchester. She completed her oncology training at Mount Vernon Cancer Centre, where she remains as a consultant today. She spent 5 years as clinical director of the department. She has a strong interest in postgraduate education, holding roles as clinical tutor and training programme director before being appointed the Head of School for Clinical Oncology for London and Kent Surrey and Sussex in 2008. She remains an active GMC accredited clinical and educational supervisor.

She first became involved with the Royal College of Radiologists in 2010 through national recruitment and as a revalidation advisor. In 2013, she joined the officer team at the RCR as Medical Director of Professional Practice, Clinical Oncology and in 2016 became Vice President, Clinical Oncology. She was elected as President of the RCR in 2019. In July 2020, she was elected as Vice Chair of the Academy of Medical Royal Colleges, with responsibility for the educational portfolio.

Dr Sam Hare is a consultant cardiothoracic radiologist at the Royal Free London (RFL) NHS Foundation Trust. As an executive committee of the British Society of Thoracic Imaging, Sam was central in implementing national COVID-19 imaging protocols and co-authoring national reporting guidelines for lung cancer screening. He also represents the Royal College of Radiologists on the British Lung Foundation Taskforce for Lung Health. Sam is passionate about service transformation and the use of artificial intelligence in optimising diagnostic imaging workflows.

After undertaking a thoracic radiology fellowship in North America (2009-2010), Sam was appointed as consultant thoracic radiologist at The Ottawa Hospital in Canada, specialising in lung cancer screening & early diagnosis. He returned to the NHS in 2011 and pioneered the innovative ambulatory lung biopsy service at the RFL NHS Trust. The service has been recognised with several national awards: NHS Innovation Challenge Prize for Cancer Care; BMJ Award for Cancer Team of the Year; HSJ Acute Sector Innovation.

Ila Dobson is Director of Strategic Accounts in the Business Development team at GE Healthcare and is responsible for NHS Supply Chain, Procurement and Government Relations. She is based at the UK Headquarters of GE Healthcare in Chalfont St Giles Buckinghamshire.  Ila also represents GE at various forums including the Industry Group AXREM of which she is the current Chair.  Ila is a member of the Commercial Leadership Team for GE Healthcare within the Northern Europe region.

Ila has worked in GE Healthcare for over 30 years holding a variety of Global, European and UK roles which included responsibility for Clinical Applications, Business Unit management (CT and MR), Corporate Accounts and Sales Management. Prior to joining GE, Ila worked in the NHS as a Senior Radiographer.

Ila has also led a number of initiatives in GE, she is a certified Six Sigma Blackbelt and has completed a number of projects with customer to optimise workforce activities and patient throughput in Radiology.  Most recently she led GE’s Innovate UK ISCF bid for the establishment of Artificial Intelligence Centres in Radiology/Pathology where GE was successful with the National Consortium of Intelligent Medical Imaging (NCIMI) at Oxford.

An electronic engineer, he joined Kodak in 1986 as a Service Engineer in Glasgow. He progressed through various Service, Sales, Product Specialist and Management roles in Kodak’s Health Group, led the transition to, and set up of Carestream Health UK Limited in May 2007 when Kodak sold the Health Group to Onex and was appointed Managing Director.

He became General Manager for Northern Europe for Carestream in May 2011. In August 2019, following the acquisition of Carestream’s HealthCare Information Systems business by Philips, he became Health Systems Sales Leader for Philips UKI.

He has worked with and in X-Ray Departments for over 35 years with Kodak/Carestream/Philips and has led technology and organisational transformational programmes and has provided commercial leadership in many large Healthcare IT programmes.

He is an Executive Member, Past-Chair and is currently Vice-Chair of the Trade Association for X-Ray Equipment Manufacturers in the UK (AXREM) and has served on the Radiology & Oncology Conferences Boards. He became a Trustee of the British Institute of Radiology in 2010 and was awarded a Fellowship of the BIR in 2014. He has been a Trustee of the College Board of Trustees of the College of Radiographers since 2014.